Hanging out in IRC channels is a great way to learn the nooks and crannies of programming languages and tools. I've tried several desktop IRC clients in the past, but each one felt more like a nuisance, and eventually I'd stop using IRC entirely until I came across the next app to try. Since these days I spend a lot of time inside a tmux session, I'd much rather have IRC in my terminal, rather than granting valuable screen real-estate (and, more importantly, attention) to a separate native app.

The main contenders for terminal IRC seem to be irssi and WeeChat. I went with WeeChat, since it seemed to be the more modern and actively maintained of the two. Both are popular options, and you probably can't go wrong with irssi either. Even though WeeChat is allegedly the more “user-friendly” client, I encountered some bumps getting it set up on OS X (Yosemite)– hence this post. A lot of what I learned was cribbed from the WeeChat quickstart guide, so I highly recommend reading through it if, like me, you're just getting started.

Below is a screenshot of what you'll end up with at the end of this post. Note that I'm using custom terminal colours, so YMMV on that front. Also, the culmination of my experimentation is on github if you want to skip these ramblings. 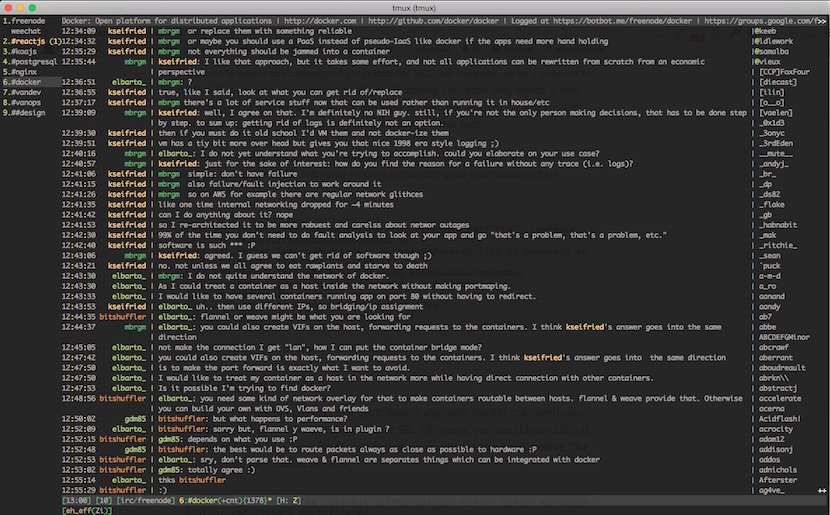 If you're interested in a command-line IRC program for OS X, I'm going to assume you have Homebrew installed, or at least know how to get it. Install WeeChat with:

The --with-perl --with-python flags are important if you want to use WeeChat scripts, since most of the popular ones are written in one of those two languages. You can also add --with-lua and --with-ruby if you think you'll need plugins from those languages.

You start WeeChat, predictably enough, by entering weechat in your terminal app of choice. After that, things can be a bit bewildering. The first time run doesn't give you any hints for how to connect to a server, configure the program, or do much of anything. The magic command to get you started is /help. This lists the available commands used to interact with WeeChat. Each command should be prefixed with a /, and you can (and should) run /help {command} to get more information about the important ones.

A few essential commands and hotkeys:

Freenode is where the majority of programming IRC talk happens, so let's connect to it. WeeChat comes with basic Freenode configuration out of the box, which is nice and convenient. I'm going to assume you have a Freenode account (or will connect without one); registering there is outside the scope of this post.

You can run /set irc.server.freenode.* to see all of the available freenode settings. I configured the following settings (substitute your own values where applicable):

I'm a little fuzzy on whether SASL authentication helps much if you're already connecting over SSL, but I turned it on anyways. This post has more information on that.

Once you've entered these settings, /quit and restart WeeChat, and on the next startup WeeChat should try and auto-connect to Freenode.

One glitch I hit pretty early was that OS X apparently doesn't ship with the SSL CA certificates needed to connect to Freenode over SSL. Of course, you could leave SSL off, but after following the news for the last few years, that just seems irresponsible. The error message I got looked like this:

The WeeChat FAQ has an entry on this, but the curl-ca-bundle package it mentions doesn't seem to be available in homebrew. Instead, you can follow this gist to install the CA bundle that you need. Update: on OS X 10.11 and later, follow the instructions in this comment instead

Back in WeeChat, the following command will point to the CA file that you just created:

Now restart WeeChat and it should finally connect to Freenode successfully!

If you followed the connection instructions above, your IRC password is now stored in plain text in your WeeChat config file, which is, um, not ideal. Fortunately, WeeChat has the /secure command, which lets you store sensitive information in an encrypted local file, and will prompt you for a password to unlock it on startup. The user guide has a nice section on using this feature.

You can customize and extend WeeChat by installing various "scripts". It comes with a built-in script manager (try /help script), and tons of scripts are available for installation. As mentioned earlier, you need to have support for a plugin's language (generally perl or python) compiled in for them to be installable.

The buffers.pl and iset.pl plugins are essential. Assuming you built WeeChat with perl support, you can install them with the following commands:

Buffers.pl gives you an always-visible list of the buffers that you have open (in my opinion this should be built-in to WeeChat). You can tweak it a bit if you want, but it works great out of the box. iset is a nice UI for interactively editing your WeeChat configuration, rather than entering verbose /set commands every time you want to change something. Install it and read /help iset for more details.

The other scripts I've found useful so far are:

Here's a miscellaneous list of other stuff I recommend looking into:

It's only been two weeks, but I'm really enjoying WeeChat so far. For the first time, having IRC open feels natural and unobtrusive to my workflow. While the initial learning curve can be quite steep, once you understand how things are laid out WeeChat is really fun to explore and customize. My weechat config is online if you want to crib some settings. And if you have questions or need help, #weechat on freenode is a great place to ask.